Produced by Russ Ward, Nash Entertainment, Jennings Productions.  I met Russ Ward through another friend / producer, Brian Lovett, with whom I'd done a lot of work.   Russ, at the time, was producing segments for a show called "You Asked For It" and was looking for stunts.  I'd met with people at Nash about a few stunt concepts.   The idea of a freefall living room caught everyone's attention and we got the go ahead.

Having tossed a number of cars, I designed the "room" to be similar to the frame of a Honda Civic.  The cars gave us good information about how things leave the aircraft and how they fly at terminal velocity.  It made sense to build a similar frame because we had enough to worry about with recliner chairs, lights, televisions, flower pots (sorry Dauve), candle holders, ash trays, coffee tables, VCRs, framed pictures, POV cameras, and so on.  The last thing we needed was a new frame to design and test.

Two 800 pound frames were built in Long Beach by Boulevard Blacksmith in the shape of a capital letter I.  On one side of the I, we strapped seats, in the middle, we bolted down a coffee table, and on the other side of the I, we locked down an entire entertainment system with battery powered TV, VCR, Lights, and so on.  On both sides of the "room" I mounted POV cameras with quick release systems supplied by Scott Christensen.  The frames came with welded rollers and, on the ground, the rooms looked like pimp daddy go carts.  They were amazing!

The idea behind the 800 pound frames was to put as much weight on the bottom side as possible.  The lighter seats and tables on the top side would naturally catch air and keep the unit upright (we hoped).  I took the frames home and rolled them into the garage.  One by one, my neighbors dropped by to ask what they were.  Of course the answer was even wackier than they'd expected.  A week later, my wife, Sissy, and I went shopping for two VCRs, two TVs, Two entertainment systems, two lamps, two coffee tables, and for one of the rooms, a sofa; for the other, two recliner chairs.  In addition, we picked up picture frames, candles, flower pots, poi puree, coffee mugs, candy bowls, and so on.  Michael Ude helped make the rooms.

Building the rooms was far more involved than I'd imagined because as we strapped, bolted, glued, and zip tied things down, we realized our strapping needed to be doubled and tripled with every item.  The forces from a 175mph wind blast on the room could come from any angle depending on how the unit flew, twisted, or flipped.  The more we tied things down, the more we realized it needed more.  Hours ticked by, then days.   I'd expected the strapping down part to take maybe seven or eight hours.  By the time they were ready to be transported to Arizona, we'd worked almost 48 hours straight.  We powered the TV and VCR for each unit, grabbed some of the neighbor's kids, loaded them on to the rooms, and pushed them all the way to the end of the block where our rented trailer waited.

We grabbed a few hours sleep and caught an early plane from Los Angeles to Arizona.   Carl Nespoli, (Couch Potato #1) met us at the airport.  Dauv McNeely (Couch Potato #2) spent the night on the road hauling the rooms to Eloy, AZ.  He brought his wife, Wendy, along and his two girls for a little "vacation" in the desert.   A few hours of work on the rooms, a nice morning jump before sunrise, and back to the hotel with the wife and kids.  Reality couldn't have been further from his plans.   The rooms needed changing, re-strapping, welding, and we were up until 2am with our morning room #1 jump scheduled at 4am.  We ended up crashing on the floor of the airplane maintenance hangar at Skydive AZ. 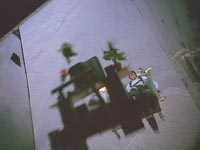 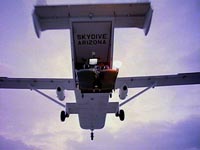 Sean Hill, our pilot, woke us up at four am after about an hour and a half of sleep.   Our goal was to be off the ground before sunrise to capture the unit falling in low light conditions.  I wanted to see the television and lamps working in freefall.   So we gathered to coordinate the drop.  Brent Finley managed to make it...Basically he learned about the project a few hours before the drop when I called him at 1:30 am wondering if he wanted to come shoot with me (my only excuse is three days building and almost no sleep).  So we worked out the details of the drop and climbed into the Skyvan with room #1, locked and loaded.  As we flew to altitude, the ground crew set up at the crash site.  Brian Burke spotted our load from the ground.

On jump run, our entire crew on board the skyvan was beyond wide awake.  My blood was pumping at full speed as the red light flashed signaling our exit in one minute.   I moved into position at the back of the airplane and put my fingers on both helmet switches as well as the switch to run the POV camera mounted at the tail of the aircraft.   At fifteen seconds out, Sean turned on the yellow warning light.  I waited a few seconds and then started the POV camera before solidifying my position by the back door.  Those fifteen seconds just prior to exit are not for the faint of heart.   I could feel my heart pounding inside of my chest and could see that everyone else on board was also tensed up waiting for the green exit light.  Sean flashed the green light and a second later the entire room rolled toward me.

I let Dauv and Carl on the couch pretty much run me over out the tailgate.  I do the same thing with the cars to keep as close as I can for the exit shot.  Everything cleared properly but the frame's speed was a little slow which made the unit flip just as it left the Skyvan.  The first flip led to the second flip and so on gaining momentum until neither Dauv or Carl could hang on any longer.  It was wild and out of control.   They were spun off about three thousand feet after exit and then the unit fell alone.  Brent and I chased it to get whatever footage we could and then deployed our parachutes and watched it fall to earth.

We all landed safely next to the crashed living room.  Russ got a terrific shot of the impact and we had a lot of good information to work with on the next living room.   The only real glitch, aside from the unit flipping out of control, was that we'd lost our POV cameras.  Dauv and Carl released them when they were thrown from the room as such a high altitude that they basically floated away by about a mile.  No one knew where they'd come down, so we spread out, took our best guess at the wind drift direction, and combed the desert for hours without finding a thing.  Later in the day, we flew over the crash site in a Twin Otter and found the white recovery parachutes attached to the cameras.  The footage from the POV cameras was golden.

With the information gained from the first room drop, we set up the second room, adding weight for balance, reinforcing attachment points, and rewiring the TV and lights to stay powered throughout the fall.  We also recruited two very strong pushers, Kevin McGuire, and a very strong girl, Sally Stewart. She used to fly Mr. Douglas(a DC-3) at Skydive Sandwich on her way to becoming an Airline Pilot. She and Kevin were to give the unit speed to catch better air on exit.  By three am, the unit was ready to go and we had about an hour to nap.  Sean and Brian got us up again at 4am and we were off.

On jumprun we all waited, tense.  This was our last shot.  Sean put on the yellow light, and then the green light.  Kevin called the exit and then he and the other pusher plowed into the unit like football players.  I could hear Kevin growling as he shoved with all his might.     MORE COMING