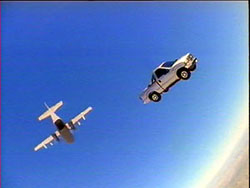 Flehner films from Buenos Aires, Argentina contacted me in '98.  They wanted to film a truck in freefall and under parachute and wondered if I had any experience with that kind of thing.  The closest I'd come was a Chevy Malibu station wagon and a bunch of Hondas, all of which, by design, bounced into sandwich looking metal chunks.  I told them no problem.   Sometimes you bite off more than you can chew and just chew hard.  In the commercial, the F-100 (our US F-250) drives out the tailgate of a military aircraft and goes into freefall.  It flies through the air and then opens it's parachute and glides toward the earth.  Above the ground, it cuts away from the parachute and falls to the ground, wheels spinning, churning up dust as it peals away.  Build Ford tough.   Easy enough.

They sent me a copy of the story boards and I went to work to find ways to make it happen.  I was happy to get the job, but realized the task I'd taken on was no small trick.  The trucks, after preparations, cost around $50,000 each and there were only two available for the production.  To my relief, word came that the entire production and rigging would be done in Argentina by the military there.  They needed some advise, but they'd handle all of the rigging because the truck was exiting their C-130 and only they can rig things that leave their planes.  The weight of responsibility had been lifted from my shoulders.  I was scheduled to fly to Argentina, shoot for three days or so, and fly home. 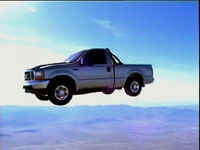 Two weeks before the shoot, everything changed.   The deal with the military had fallen through and I had three weeks to set things up. Could I handle it?  Again I said yes and with fingers crossed, and started to call my friends.  Here's how it came together.

Todd Shoebothem and Anne Helliwell of Basic Research were in charge of the rigging.   Gary Durice was their expert rigger of choice for this job.  Along with Jerry Borquin D-22, he'd dropped and saved cars in Terminal Velocity and pitched an elephant in Operation Dumbo Drop.   Still, the rigging was tricky.  The trucks needed to freefall ten thousand feet before opening a parachute and then survive the opening shock at terminal.  They weighed five thousand pounds without motors.

Jim Blumenthal in Kingman, AZ provided the C-123, and just about everything else.  Although the trucks were rigged in Argentina, they still needed quite a bit of work, and we needed to set up the test truck (photo) to be as similar to the real trucks as possible.  Jim did the welding, balancing, nailing, bending, cutting, sand bagging, loading, and so on to get the trucks ready to be dumped... then he did what he was hired for, loaded them into the plane to be dropped.  If you ever work with Jim Blumenthal, stand aside, cause he's on a mission and unless you're working up a sweat, you're taking up space.

So we dumped the test truck from 15,000' above sea level.  I'd practiced hanging from the left side of the tailgate and found it easy to push my body slightly out to make room for the truck to just pass the tailgate before I let go.  In flight, the force of the air racing by pushed me back directly in front of the truck's front tire.   As the truck rolled toward me, I pushed even harder.  The wind just pushed back and as the front bumper reached the edge, I tumbled away.  In freefall, with a drogue, the truck flew well.  I was surprised to find it's fall rate consistent.   It tracked backwards pretty fast, but even that was consistent and relatively easy to chase.  It was the biggest vehicle I've flown with to date.  Even the new Fords were a bit smaller.  It's always interesting to fall with an object that just tosses around in the sky.  There's no dirt dive, no interaction, just the chase back and forth.  Sometimes I chase the cars, sometimes they chase me back.  This truck just kind of tracked in one direction and let me take it's picture.

The first new Ford flew pretty well except that it wanted to rock back and forth over it's center balance point.  The drogue system was attached to four points, but the points were too close together and didn't offer much stability.  Also, the drogue hung out in the truck's burble and bounced around a bit causing the main G-11 canopy to prematurely deploy after about eight seconds of freefall.  Great for the helicopter waiting to take canopy shots, lousy for me falling away from it.  I decided to keep rolling and get a few plate shots on the way down.  The helicopter with Stan McClain on camera circled the truck hanging nicely under canopy all the way to the ground.  The truck landed with practically no damage, so we still had two trucks.

I decided to let the next two trucks bounce.  We had the canopy shots and needed freefall, so the best option was to take them up with drogues only.  The second truck also seesawed with the front a bit heavy.  The seesawing and slight turning made the trucks move around lunging forward as if to run me over, and then backing away as it pitched up.  I found myself flying hard to keep the shot.  The visual of a large, metallic silver, brand new truck in freefall was perfect.  The cars I shoot are beaters with dust flying all over the place.  These F-250s were new and polished.

The third and last jump was with the truck we'd saved under canopy.  We worked quickly on the rigging to beat sunset and loaded up for the jump.  The sun was maybe ten minutes above the horizon when the truck and I exited the airplane.  Golden reflections gleamed from the front grill as it rolled from the ramp.  In my shot, you could read the Ford emblem and then we were airborne.  Again the truck seesawed a bit and flew all over the sky.  We tried moving the attachment points further from the center, but the director felt it would be easier to deal with the rocking of the truck than trying to erase cables around the truck..  I chased it, and then it chased me.  I hated to end the shot, but we had to part our ways.  I deployed, and floating under parachute, watched it plunge to earth.  That was the end of a perfect day, and the beginning of what should be a pretty amazing commercial...  jj

Back to JENNINGS PRODUCTIONS