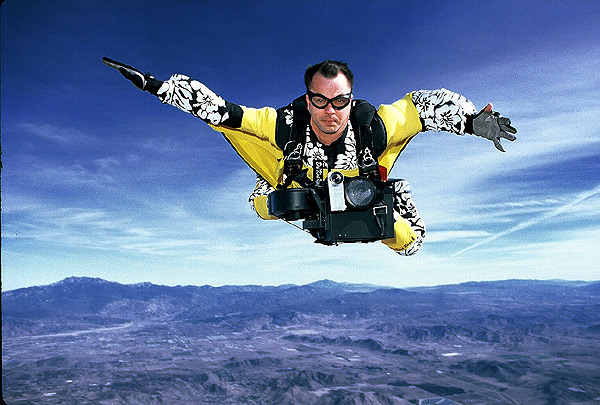 Practicing with an 85 pound mockup IMAX camera over Perris, California

When MacGillivray Freeman Films contacted me to film skysurfing with Troy Hartman in IMAX, I was stunned.  I assured them I could do the job.  After all, their company was the first to haul an IMAX camera to the summit of Mt. Everest, and BJ Worth had shown the world that skydiving with large format cameras could be done.  I pictured myself with this huge box strapped to my helmet in freefall - and then pulling my parachute only to have the camera, helmet, and my head continue to fall.

Troy Hartman and I filmed skysurfing sequences for an IMAX film about extreme sports in California produced by MacGillivray Freeman Films in Laguna Beach, CA. I jumped the 85 pound IMAX camera to film Troy over Mission Bay, close to San Diego. The location was spectacular. The shoreline is carved into a tangle of inland waterways and our drop zone was a small island park with palm trees and green grass surrounded by water and bridges. An A-Star helicopter sat ready to take us 12,500 feet above the park. At 12,500 we could see north to Laguna Beach, and South well into Mexico. The camera was huge and I had to wear it on my chest instead of on my helmet, but overall, it flew well and we came down with nice images. BJ Worth came out to film Troy and me flying together. Thousands of people who see the movie will feel like they're flying!

Update: On the 19th and 20th, BJ Worth chased Troy and me to shoot team interaction shots. On day one, BJ quickly found out that the mounting system he used for skydiving was far to heavy to film skysurfing. We worked together on that problem and, by the end of the day, came up with solutions that helped him slow down significantly. Troy and I also learned to limit our horizontal slide and by day two BJ was rolling some very nice footage. On day three, I put the IMAX on for more single shots of Troy.

Update:  ADVENTURES IN WILD CALIFORNIA IS PLAYING IN THEATRES AROUND THE WORLD.  Excellent reviews are spreading and theatres around the country and the world are picking it up. It's a fast paced ride through California with some of the state's leading risk takers, in sports, environmental research, and entertainment.  The cinematography is stunning - and MacGillivray Freeman films (Everest, Dolphins) again takes IMAX to new and unusual places.