Jim Blumenthal gave me the heads up that an infiniti commercial was headed our way.   His C-123 was on line to make the drops, but the director, Nico Beyer, needed the drops to happen over a dry lake bed.  At this time of year, the cracked dirt on the dry lake only covers the soggy dirt below and any plane landing there would have to be towed out.   Also, the shot list called for the frame to be suspended from a helicopter.   Peter McKernan coordinated the aerial equipment, a Sikorski   helicopter that could easily lift the monoframe to altitude, and a Bell Jet Ranger that was used primarily to scan the parameter of the lake bed for hikers, motorcyclists, and whoever else might wander off into the middle of nowhere on a sunny day.  Peter also coordinated the operation with the FAA.  They helped us get the required permits practically over night.  Many thanks to George Dimartini for his help.

The monoframe, as it's called, weighed around seven hundred pounds.  My job was to film it tumbling in freefall and I expected a slow fall rate given the surface area, with it's open front, back and sides.  It would also be a slippery target, tracking and changing fall rate with every flip.  I selected a jumpsuit I'd used to jump the IMAX camera for MacGillivray Freeman Films a few months ago.  It was practically all wing and allowed me to fall normal to slow even with a 75 pound camera strapped to my chest.

There were two old utility vehicle frames on location just for test dropping, but the budget didn't permit the tests, so my first jump would be with the real deal, and there were only two of the real deal, so the learning curve had to be fast.  Scott Christensen and Brett Townley rigged the vehicles with a cluster of parachutes and an AAD set to fire at 2,500 feet above the ground.  The goal was to recover the monoframes, bang out dents, and take them up again.

We stayed at the Mojave desert Motel 6 and drove to the dry lake bed at 5:30 the following morning.  There are probably tens of thousands of wind mills posted in the mountains of this region, and they don't lie.  Winds howl through kicking up dust and tumbleweeds almost every day and finding a window of opportunity to parachute in the area was like rolling dice.  I had to steer left almost the entire drive to the lake bed just to stay on the road, and two cars in front of me, there was a big rig with it's tail end literally blowing off the road as it jammed along through the gusts of wind and dust.   The driver was either very familiar with the elements, or just plain nuts.   Amazingly, winds at the location, only a few miles from the wind storm, were acceptable for jumping.

The Sikorski climbed easily to altitude with the monoframe dangling below.  Karim, the pilot, had a quick release system set up to drop the frame just as I'd exit the aircraft.  The flight tech, Dave, would give me a two minute warning to put on my helmet and make last minute gear checks.  At thirty seconds before drop, I turned on the video assist and the Super 8 camera I was asked to carry in addition to the 35mm camera system.  Then I climbed out to the wheel and stood with my finger on the trigger of the 35mm camera and waited for the command to exit.   When Karim gave the OK, Dave gave me a thumbs up and I started the exit sequence.   Holding on to the helicopter with my right hand, I waived my left hand out, then in, then out again as I stepped off the wheel.

Karim timed his release of the monoframe with my count and dropped it just as I fell away.  This left just the vehicle and me falling through space right next to each other.  It's a great feeling, just falling away from a helicopter with almost no forward airspeed, because for the first six seconds or so, you just fall through kind of a void before building airspeed.  The monoframe and I did a slow roll together and as we built up speed, then it slowly drifted up and away from me.  It was far too light at 700 pounds and fell under 100 mph.  Even with all wings spread tight, I couldn't stay up with it.  Then it began to tumble a bit spilling air and diving slightly.   For a moment, it seemed I might be able to catch it.  But then the pilot chute for the recovery parachutes prematurely popped out and flopped around the vehicle.   Then it caught air and pulled the main parachutes into the wind, but by now the vehicle was tumbling fast and the lines wrapped around the entire frame.  I thought it was curtains for that one, but as the parachutes filled with air, they whipped the frame around and cleared themselves for a perfect opening at 8,000 feet.

Ed, the producer at Compass Films, was determined to finish aerial shots on day one.   Helicopters are expensive to keep for another day.  Winds were picking up and he wanted something in the can before they shut us down, so instead of rigging the second monoframe, we simply added weight and hauled it up to altitude.  Again, the exit was beautiful, just falling peacefully with the monoframe for six or seven seconds.  This car flew faster, a little, and I was able to maintain a shot for a little while, but again, it floated up and away.  I'd asked for more weight, but there wasn't enough around.  The only thing we had were two pressure tanks - like the ones used to fill party balloons.  And so with that, we were asked to stay another day to see what we could accomplish with the one monoframe left.

I had excuses, good ones.  But, even when they're good, excuses suck.   Basically our two jumps on day one were considered practice.  I had a good idea about the weight needed for the one remaining car to fly properly and that night they brought lead weights in from Los Angeles.  Now we'd had our practice and as much weight as I'd asked for in the beginning.  To blow the shot now would be mud in my face, not to mention, a wasted of a lot of production money.  I felt a bit of the kind of pressure I'd known well in competition skysurfing.

Conditions on the morning of day two, Saturday, were perfect.  The car had the additional weight I'd requested - lead bags stuffed wherever we could hide them.  As I stepped away from the helicopter, just after the car was released, I noticed a considerable difference in acceleration.  I approached conservatively and noticed a pattern of flight.  The monoframe spun slowly and tracked in circles. It's fall rate was consistent and relatively easy to follow.  Bit by bit, I felt my way closer until I was about eight feet away from the spinning frame.  My position put the sun just outside of the picture to catch reflections coming from the metallic body as it tossed around.  The shot was nailed, everything else would be gravy if the parachutes opened properly.  They did, and the frame settled down with only a few dents. 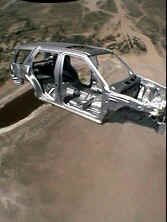 Given the footage we had in the can, the director was happy to let me fly around a bit with the next frame.  This time I exited head down with the frame and let it fall away from me.  Then I flew past it by around ten feet or so.  On the second fly by, I did kind of a TBowl move over the top passing it by maybe five feet.  This one tumbled all around reflecting sunlight and presenting itself in a hundred different ways.   It was a great second take.  Again, the parachutes cleared and saved the frame with only a few dents.  Winds were beginning to pick up, so we removed the rigging and flew up for one more drop.  The third drop was as good as the first and second and for a thirty second commercial, there was more than enough footage.

I expect this will be a great ad.  The concept is clever, P.O.V. cameras were mounted throughout the vehicle in freefall, and guessing from the work I saw on the ground, the ad should have a very interesting ending.  I don't quite understand what they were doing, but it's not for me to know.  I'm just one part of the big picture.

Thanks to Carl Nespoli for his assistance, Scott Christensen and Brett Townley for saving the frames and keeping a positive attitude under pressure, Peter McKernan for all things aerial, Karim, Dave, Liam, Peter Sr., and the rest of the gang.