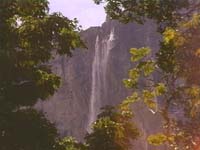 MTV Sports B.A.S.E.       I more or less stumbled into this project.  MTV Sports was planning a 30 minute documentary about a student BASE jumper going through the steps of learning how to BASE jump.  I was called to shoot images for the show and had to confess that I'd never made a BASE jump.  Rob Harris was going to teach me in Chamonix, France but after the '95 World Meet I traveled home immediately for a job, so I had no experience.  I suggested they call someone else and expected that was the end of the project for me.  A few days later I received another call from the producer asking for a photo and, would I be interested in learning how to BASE jump.

Will Ox was my instructor.  We started with bungee jumps from a tower.  I think the bungee jumps were a great way to feel how to do a proper exit in a low pressure environment.  I think I made twenty bungee jumps that day to practice and to jump a variety of camera point of view angles.  The next day Will took me to 800 feet in a hot air balloon for my first low altitude jump with BASE gear.  The haze looked like a cloud below, but not the kind you'd want to fall through because somewhere in the middle of it was the ground.  That jump was truly an adrenaline rush as was the second jump that day.  Bridge Day at the New River Gorge was our next stop.  Will and I made three bridge jumps that day and interviewed with Dan Cortez.  Bridge day is an incredible event.  The jumps are legal and hundreds are made while an audience of thousands cheers on.  Finally, we journeyed to Venezuela to jump from the tallest waterfall in the world, Angel Falls.  Sitting quietly at the top of the falls, peering over the edge, the view is nothing less than breathtaking.  The jump was a spiritual moment, a taste of living.