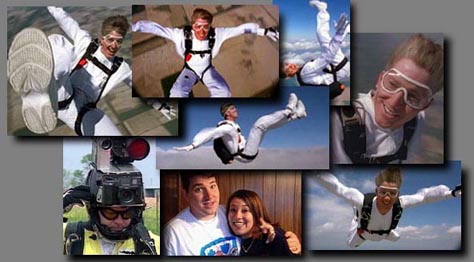 The commercial begins with a peaceful view of blue sky and puffy white clouds. Suddenly a skydiver drops into frame, flipping, turning, freeflying, smiling. Blue Cross goes extreme. He deploys a big white parachute with the Blue Cross Blue Shield logos and casually floats down to earth. A single guy flipping through the sky, nothing technical, just having fun.

The production coordinator and purely southern dude, Tim Shick, met me at the Little Rock airport, heaved my stuff into his truck and off we went to meet the jumper talent, Jaime Paul. I crashed like a rock. The next day was practice.

The parachute center chosen for the shoot was the Central Arkansas Skydiving Center located in ________, AR, a nice facility with a Queen Air and Cessna, owned and operated by Jim Weddle and family. Real friendly folks with twangy accents. Course I should have expected that. A friend of Jaime’s told us that most of the land around the airport would be covered in water and that the landing area was approximately fifty by one hundred feet (small). That was kind of intimidating to imagine, and I’d be carrying 20 pounds of cameras on my head – not healthy in the event of a splash down. I figured, I’d turned down other drop zones, I’ll turn this one down if things aren’t right. Turns out, dry fields for as far as we could see in every direction.  She must have been thinking of some other planet.

Most skydiving centers are out in the boonies. Jim’s DZ was no exception. _____ is all small town. Most of commerce ran along one street, people seemed to pass most of the day on the front porch, the big ball game in town was Little League. What impressed me most was the latest crime. Seems some of the local boys robbed the town rib shop. In the dark of night, they snuck in, armed with spray paint to knock out the video surveillance system. After that, they grabbed the loot and made a getaway. Before they’d finished counting their quarters, though, local police stormed their hide out. Seems they sprayed the television monitor instead of the cameras. Case closed.

On days one and two of the shoot, Jaime and I had the Queen Air mostly to ourselves. Our pilot appeared almost old enough to have a driver’s license, but I could tell he was damn good, and he’d have us at thirteen thousand feet in less than ten minutes. Must have sat on his dad’s lap in the crop duster as a kid. We’d have easily finished the job in a day, but the weather kept us for three. Days one and two of the shoot pretty much went down the tubes, but on day three, Jaime and I jammed through fourteen jumps from Jim’s Cessna and nailed everything, including jumps just to get stills for magazine adds and billboards. Jaime even made a jump for stills in Missouri, but I won’t get into that. OK, I screwed up a shot.

Dan Kateras of Martin and Martin, and Gary Jones directed Jaime and me. Their ideas were good and the shots came together to make a fun commercial, that as I hear it, became quite popular in Arkansas. I’ve heard rumors of a sequel. Bring it on.  Want to know more about this ad?  Check out jonesinc.com       jj

BACK TO JENNINGS PROD.