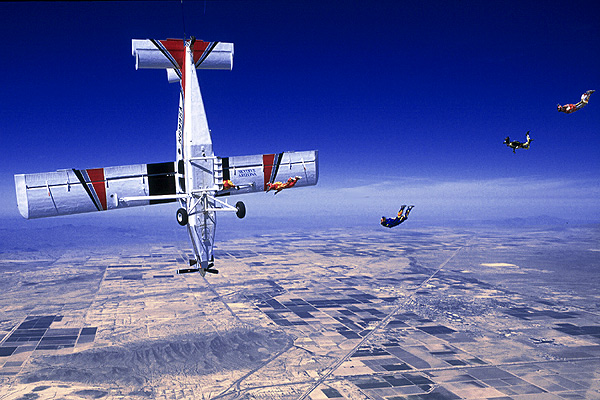 On Monday night, April 17th 2001, I scrambled my cameras and rigs together and hopped a flight from Los Angeles to Phoenix with my assistant, Carl Nespoli. We were headed to Skydive Arizona to coordinate and film three skydivers exiting an Otter to chase down a diving Pilatus Porter.... The schedule - fly drogue test on Tuesday, fly practice on Wednesday to familiarize the jumpers with the Porter, and Thursday to perform the stunt. I was contracted by a show called "That's Incredible" to put the job together.

Early Tuesday morning, Carl and I met Sean Hill at the hangar. Sean had already set up the interior of the Porter for the jumpers. Between the cockpit and the passenger area, he bolted in a thick layer of lexan. We'd thought of building some kind of net to keep the jumpers from falling into the cockpit when they entered, but the lexan was so much better. It was perfectly clear and allowed us to set up terrific P.O.V.s throughout the cockpit. So the Hills were ready to go. They'd also installed a tow package to the porter to handle the tension of the drogue - around three thousand pounds of tension, I believe.

But there was a hiccup with the Production Company. The insurance the Hills requested to protect the Porter hadn't been arranged. The producers scrambled throughout Tuesday to solve the problem and during that time we flew a drogue test to give Sean some practice and to check his speed.

When Sean deployed the drogue and nosed the Porter down, Omar Alhegelan and I exited the trailing Otter flown by Larry Hill. The fall rate was reasonable, but the Porter tracked forward relatively fast. Omar and I had to track hard to stay with it. That jump gave us good information. It also gave me a bit of the creeps. The prop, feathered and under no power, still spun at around 100 rpms and the Porter looked Ominous, Unapproachable, too big. The only way the jumpers could safely approach the Porter was with Sean holding a perfectly stable target. Otherwise, it was just too big and hard and would easily knock out or kill a jumper. We landed feeling positive about the test, and apprehensive about the stunt.

Then things got complicated. The producer, director, and show host arrived. Nothing was accomplished to fix the insurance issue and we were told to stand by. All day Tuesday, we sat waiting for word on the insurance. Nothing came through. On Wednesday, things only got worse - we waited all day. That evening, they called wondering if we could throw together another stunt. Apparently, their lawyer advised them that our airplane to airplane transfer was riskier than other stunts. They wondered if we could torch a parachute, or toss a car or something. Someone at their office must have been an authority on skydiving stunts and figured we could just throw together another stunt.

I advised them that a well-planned stunt is far safer than any last minute gag and we had no intention of changing gears. After some thought, they called me to cancel the project. That evening, I hired the entire crew including the Hill's Porter and Otter, the helicopter camera ship, the P.O.V. camera guy, the production's Betacam crew, the PA, and all of the jumpers. All the elements were there and I knew we could do the stunt, so I took the risk.

Thursday morning, we got started with practice jump #1. The helicopter's camera crapped out, so we flew without it. At 13,000 AGL, Carl exited the Porter to deploy the drogue and Sean nosed it straight over. Omar, Steve, Brent, Greg, Blake, and I went after it. As we converged on the Porter, the drogue bridal snapped. Sean accelerated away and had to pull out of the dive leaving the rest of us to hang around in freefall.

We landed and walked to the hangar. Scott Christensen and Chuck Ross, our drogue riggers, stood there scratching their heads trying to figure out how a four thousand-pound test bridal would snap. We thought, perhaps a tension knot, but video playback showed that it had just snapped from the tension. Perhaps it had picked up a nick from some rock. Scott and Chuck got busy re-rigging while the rest of us picked our noses.

Then a dust storm rolled in with winds blasting at 60mph at least. The producers called to see how things were going with "my" project and all I could tell them was that we had no helicopter camera, no drogue, and a dust storm. The winds howled until sunset and there I was, holding the bag, with expenses in the tens of thousands per day. Omar, Steve and Greg pulled me aside to say they'd forfeit their pay if everything folded. They were there in spirit, wanting to do this thing as much as I did.

Things had to come together on Friday. The porter was leaving for a weekend boogie and I was out of money. We woke up to a breezy Friday morning with higher winds predicted. I gave the morning sermon. "You guys know the drill. Lets do this thing." And we were off.

Sean flew a perfect line and we all flew up close to the Porter. Omar climbed in by close to 10,000 AGL and stood inside the door waving to the rest of us. On flight #2 we decided to go for all three. Sean flew another perfect line and first, Omar climbed in, then Steve, then Greg - and we were done. They'd all chased down and climbed into the Porter within around 5,000 feet of freefall from 13,000' to 8,000'. We could have put two more guys in, no problem, but three was plenty.

The very moment Greg climbed in, I went from being Joe Chump, to Big Joe, who stood his ground and got the job done. The rest of the crew even gave me an applause when I landed.

Back in Los Angeles, the producers were thrilled. We picked up ground shots with the show's host, packed our gear and headed home. For my additional troubles, I became the proud owner of all the footage on the project. That means, it will be on the DVD version of Good Stuff - and that's cool!